The Future IS What It Used To Be

The Future Is What It Used To Be, is the long-awaited album of new material from The Guess Who, one of the longest-running rock groups in history.

It comes in the wake of the July 17, 2018 drop of the lead single, “Playin’ On the Radio“, a celebration of the magic of the radio airwaves and the songs that became the soundtrack to many of our lives. Award-winning film/video director Nigel Dick (Britney Spears, Nickelback, Oasis) directed the accompanying video.

In 2008, vocalist, multi-instrumentalist, songwriter and producer D#, who has worked with a who’s-who of artists in the classic rock genre, joined The Guess Who. He wrote and produced the bulk of the new album with guitarist, producer, songwriter and fellow band member, Will Evankovich, who has worked/performed with a lengthy list of chart-topping artists. Most recently, Will was the co-producer of the current Styx album, The Mission, with vocalist/songwriter Tommy Shaw, who actually sings on five tracks on The Future Is What It Used To Be.

“The approach Will and I took with the album was to try and make it sound as vintage as possible – new songs recorded in the old style while staying true to the sound of that classic rock era,” explains D#. “I think for the most part we achieved that. It certainly helped to have multi-GRAMMY Award-winning producer/engineer Jim Scott (Tom Petty, Sting, The Rolling Stones) mix the record.”

On The Future Is What It Used To Be there’s a little nostalgia and some looking in the rear view mirror with songs like the lead single “Playin’ On the Radio” and the similarly reflective “When We Were Young,” which, in historical context, refers to the much-travelled group as “Manitoba million milers on a million dollar ride to the other side.” Leonard Shaw of the group had just become a million-miler with Delta Airlines but the song is actually a nod to the origins of the individual members of the band with its mentions of “California wine vines” and “cotton fields in Carolina.”

There’s a “silly love song” (“Give It A Try”), a tale of temptation (“Baby Comes Around”) and of relationship tough times (“A Long Day”) and one (“Runnin’ Blind”) inspired by the mental machinations of a nerdy guy trying to pluck up the courage to pursue the girl of his dreams. Note, that they’re not necessarily pointing fingers at sad sack suitors outside of the group’s circle here. There’s a running joke with the band which goes…”I got into music to get laid… and as soon as that happens…I’M OUTTA HERE!!!”

“In America,” was inspired by the financial meltdown in 2008.

The poignant “Haunted” is a recollection by the song’s writer D# of the moment he had to come to terms with the imminent passing of his mother.

“All at once, I knew you were dying
And all the life sucked right out of me
All at once, I could see clearly
Cos up until now, it hadn’t occurred to me.”

Sharp (D#), reckons these new songs, lyrically and musically, are the soundtrack of his experience with the band. “I wrote these songs just observing the people around me,” explains Sharp (D#), who contends that the thing that distinguishes The Guess Who from bands of the same vintage is that the group is more entertaining and visually dynamic. “We get the audience involved and all of us participate in that. It’s the individual parts that make up this new whole.”

Once referred to by Rolling Stone magazine as: “One of rock’s most consistently fascinating maverick bands, with a succession of meritorious songs that has few equals among contemporary North American groups,” The Guess Who is a musical institution of sorts who not only boast an impressive catalogue of chart-topping hits, including “American Woman,” “These Eyes,” “Laughing,” “Share the Land,” “No Time” and “Clap For the Wolfman,” but also this new batch of original songs that match the dynamism and excitement of their live show these days.

“This band honours the legacy that was created by The Guess Who in all its various configurations of members over the years,” notes Garry Peterson, who has been with the group from the start. “Our mission quite simply is to add to that legacy by writing, recording and performing new songs. You are always the sum total of your parts and our parts go a long way back.”

One of the current cogs in the wheel is bass player Rudy Sarzo for whom The Guess Who was part of the soundtrack of his life. The connection between Rudy and the group came through Canadian rock diva Sass Jordan, who is married to The Guess Who’s D# and toured with Rudy for a time in the Geoff Tate version of the American rock band, Queensryche.

“Getting involved with a new band is always like a dance or dating,” says Rudy “When I was first asked to come in and do some dates with the band, I spent some time feeling it out but it didn’t take long for me to understand that this is a great band and a bunch of great guys. Of course, I was familiar with the music before I met everybody in the band so everything added up to a wonderful musical experience and a great band to be a part of. By the time they asked me to join, in my mind, I was hoping they would.”

Keyboardist and songwriter Leonard Shaw joined The Guess Who in 1990 and since that time has spent a quarter of a century with the group. A collaborative start on this current album project came when he, D# and Will Evankovich decided to get together for a writing session in Santa Rosa, California in 2015 and came up with the song “Baby Comes Around.”

Leonard recalls that the producer’s contribution to the overall sound of The Future Is What It Used To Be was in dialing in classic sounds from the ‘70s. “When they pulled out a Clavinet D6 for me that was in mint condition, we put it through a Fender amp with a Phase 90 pedal on it and, boom, it was exactly the right sound for the era that we were trying to sound like and for the song that we were recording.”

Will Evankovich explains that the songs for this album are a shared collection of ideas to simply keep the spirit of good rock & roll songs alive. “We all grew up with such an amazing lineage of music, and in this writing process, we shared so many of these influences in these songs. What makes it the most special though, is that by doing so, we created our own sound, as any good band that has the correct chemistry does. It’s just right when it all clicks.”

The recording of The Future Is What It Used To Be was an emotional experience for Peterson, an original member of The Guess Who. “When we went in to record the album at Blackbird Studios in Nashville, I felt like I was home again. It brought me to tears because I never thought I would experience the process of recording again. It was an incredibly cathartic experience in many ways. This album bridges the gap between the old world of The Guess Who and the new.”

‘The Future IS What It Used To Be’ track listing: 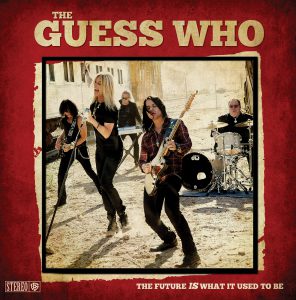 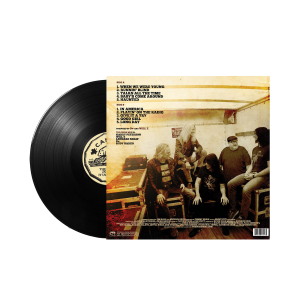 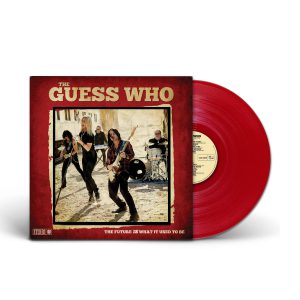